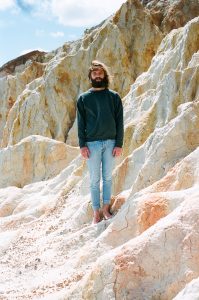 Lucas Laufen’s music can be likened to a form of therapy. His delicate brand of folk effortlessly transports the listener from any stress, grief or sorrow. Sombre falsetto melodies married to shimmering guitars within elemental orchestrations that yearn and plunge, endow us to stop, breathe and escape the daily noise.

Growing up in the small ex-fishing town of Port Lincoln Australia, Lucas was a passionate pianist at the age of eight and an ardent trumpet player at 10. However, it was not til his teens that he discovered the acoustic guitar and began fostering a deep and unique passion for songwriting

Lucas’s musical narrative embodies the dichotomy of the two worlds he inhabits, combining the coastal poetry of the wild Australian landscape with the rich history of the European continent he now calls home. The Australian songwriter, now Berlin based artist, self released his debut EP “Goodbye” in early 2016. The release expressed an important milestone for the young artist, as he left behind his small-town life in Australia for the German capital on the other side of the world .

An incredibly dedicated and hardworking artist, since touching down in Europe Lucas toured extensively across the continent. Building a loyal audience playing over 300 shows, including a Live At Heart showcase, and supporting the likes of Hollow Coves, Julia Jacklin, Paul Dempsey, and Billie Marten.

In 2018  Lucas travelled to New Zealand to record his debut album “I Know Where Silence Lives”  with producer Ben Edwards (Marlon Williams, Julia Jacklin,  Aldous Harding). Shortly after completion of the album Lucas signed with Berlin label Embassy of Music (Björk, Ásgeir, Passenger) collaborating on the release of the debut record in December 2019. The album received  widespread radio and editorial support in France and Australia, alongside German radio support from Flux FM, Radio Eins, Deutschlandfunk and HR2, as well as landing three Deezer editorial playlist spots and a TIDAL rising cover artist feature .

Like many, the COVID 19 pandemic has for a time put a stop to Lucas’s extensive touring. However, the songwriter has redirected his focus into the studio, and is currently preparing his next body of work aimed for release later in 2021/22, once more on Embassy of Music. Accompanied, circumstances allowing, with another fresh swathe of shows across Europe and beyond.