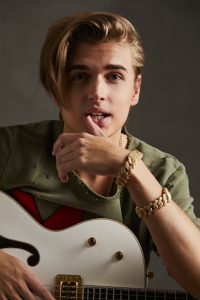 For his young life, MALCOLM BAEZ has already been on the road quite a bit. Just 18 years old, he has already been able to see and experience places that many others could not have been to. The impressions Malcolm was able to gain thanks to his childhood in an European family, based in the California Bay Area and Los Angeles, also influence the songs he has been writing by himself since he was eleven years old.

MALCOLM BAEZ gained early showbiz experience at famous dance and acting academies, including The Playground and the renowned Lee Strasberg Theatre & Film Institute in L.A. Stars such as Steve Buscemi, Britney Spears and Julia Roberts frequented here in the past and laid the foundation for their careers. MALCOLM BAEZ also saw the inside of Henson Studios and Westlake Recording Studios in Hollywood and worked with producers Eric Hudson and Narada Michael Walden. They are considered living legends of their profession, having delivered major soundtracks and hits for artists such as Madonna, John Legend, Nas, Kendrick Lamar and Justin Timberlake. In other words, Malcolm is in the best of company, and probably the next to pull off the big coup.

The fact that MALCOLM BAEZ found his way to Germany, of all places, and hence to a place that is so entirely different from California, may have been the next stroke of luck. His current residence in Berlin, for instance, is in sharp contrast to sunny Los Angeles, and the new lifestyle that inevitably comes with it has once again broadened his musical spectrum and his emotional horizons. Well prepared as he is, MALCOLM BAEZ is now about to take the hearts of the TikTok generation by storm with his unique sound and international style.