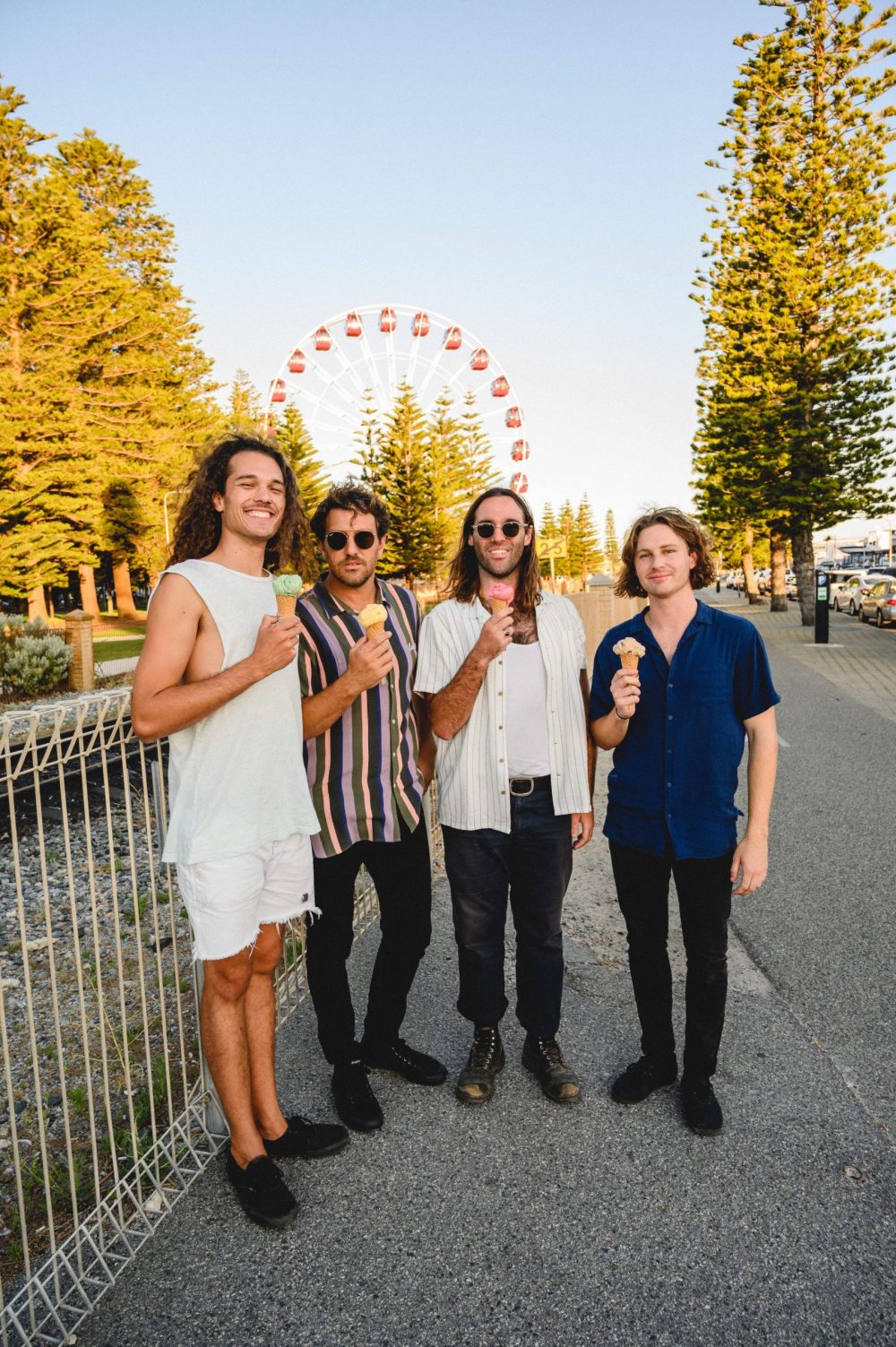 From touring with iconic artists Madness and UB40 to swimming with whale sharks in Exmouth for the Whale Shark Festival, Caravãna Sun has built up quite the reputation beyond the sunny shores of Australia. Hailing from Southern Sydney, Caravãna Sun formed in 2010 with original members Luke (guitar/vocals) and Ant (bass/vocals). After touring around Australia whilst studying music at University, the band moved through a handful of candidates before finding their permanent members, and pals, Chris (keys/vocals) and Smithers (drums).

Described as “the most explosive performance ever witnessed” by LOST Magazine, Caravãna Sun has always been known for the raw energy of their live shows. From the huge crowd singalongs to the quiet soulful heart moments, they always keep their focus on the connection to their audience.

“We began playing in small venues, tucked away in the corner. Our songs were aimed to make people dance and move in any way. The band started in a place of gypsy-ska and reggae with a big focus on the trumpet and driving rhythms to keep the energy up. We take our audience on a journey. With such an honest love for music and for each other, Caravãna Sun has had an infectious feeling that’s been at the heart of every performance. Our atmosphere is truly honest and present in every moment. From Luke’s driving atmospheric guitar riffs to the swirling analogue synthesis, we paint pictures with sound and build the moments up to huge crescendos, usually ending up in a huge crazy/sweaty party.”

By 2016 the band had performed at over 500 shows from all corners of the globe, released three full-length albums, including the critically acclaimed album Guerrilla Club (2016), with the Sydney Morning Herald calling it “a sonic treat” with 4/5 stars and ”An album so full of otherworldly imagery and highly evolved instrumentation” by Rhythms Magazine.

Wanting to find that next story to tell through their music, Caravãna Sun garnered a reputation for always being on tour.

“We love being on the road and sharing stories with different communities. We’ve found ourselves in the middle of the desert in remote Western Australia, hunting for mud crab with local aboriginal elders and been inspired to write some of our favourite songs. We’ve been at a small fishing festival in the south of Portugal, performing ‘till the sun comes up with some of the best people we’ve met. Playing live and touring is in our blood and has been a true gift to share these moments with thousands of people around the world.”

With the surf running through the band’s veins, it was only a matter of time before the band paired with fellow ocean buffs, the Sea Shepherd Conservation Society. The ‘Whale Song’, having now reached over 600,000 plays on Spotify alone, was written in the early hours of the morning on a 100-year-old piano belonging to bassist/vocalist Ant Beard’s grandmother. What originally started as a heartfelt and solemn ode to migration led to the creation of The Whale Song Tour, where the band donated merchandise sales to the not-for-profit organisation over a 19-date period.

“We’ve had the opportunity to perform, sleep and party (a little) on their incredible boats with some of the most inspiring people to date. A community we love and cherish, Sea Shepherd has been an incredible friend to Caravãna Sun and continues to path the way for ocean conservation.”

2018 wasn’t without its own thrilling adventures for the band, which included separate national tours supporting the renowned UK acts Madness and UB40 and a 35 show bender throughout Europe.

“We had our flight cancelled before the first show with Madness, all our luggage sent to the wrong city and only three out of five band members on the plane to make the show by 20 mins. We nervously wrote an acoustic set for 4000 people when Madness came into our green room and thanked us for making the show with hugs and a bottle of champagne. Needless to say, it was one hell of a tour. Incredible! One highlight was getting invited on the stage with them in Sydney & playing on the encore song ‘Madness’!”

After returning from a huge 2019 European summer tour performing to thousands across Germany, France, UK including Boardmasters festival with Foals, Florence The Machine & Ocean Alley, and performing a huge New Year’s slot at Woodford Folk Festival, Caravãna Sun released ‘Legend’, a song featuring their best mates LaBrassBanda, which was recorded in a beer tent in Munich, Germany.

“We first met LaBrassBanda in 2016 through a chance meeting. We were performing at a small festival in Austria when the bass player (Fabi) approached us with admiration for our live show. Before we knew it, we were on tour and performing with them to over 6000 people. It’s been all love ever since!”

Over the years, the band has moved into exploring moodier territories by looking to take people on a journey through different soundscapes, without losing the essence of energy. For their newest body of work, Caravãna Sun took to a remote location in the Blue Mountains, west of Sydney in Australia’s New South Wales. Thankfully untouched by the fires that engulfed much of the nearby area, the studio became their safe-haven away from distractions of the outside world. Unchartered territories were explored, leading the band to new discoveries both creatively and spiritually.

With a new-found electronic influence, the four-piece creates grooves and atmospheres that hold up in the studio to provide a beautiful canvas for new songs. The band has made a big shift to focus on songwriting and crafting a unique sound that encapsulates the heart of the Caravãna Sun experience.

“We are hoping to build an audience in Europe that shares the feeling we do in music. People that connect to our songs and love for being together. From our live shows to studio recordings, we hope to meet and connect with as many people and spend our days laughing/dancing/crying together!”

‘Charlie’ will be the band’s first single after signing with Berlin’s Embassy of Music, joining a roster that includes Björk, Robyn and fellow Aussie acts Ball Park Music and Husky.